Last Updated on Oct 8, 2019 at 1:55pm | Communications Office
Two recent announcements will make an impact on Garrett County broadband service availability.
The first announcement was made by the Federal Communications Commission (FCC) regarding an award process that was originally started last year. As part of the Connect America Fund, the FCC is reforming its Universal Service Fund (USF) and Intercarrier Compensation (ICC) systems to accelerate broadband build-out to the approximately 23 million Americans nationwide who still lack access to broadband. This reform will expand the benefits of high-speed internet by transforming the existing fund into a new Connect America Fund focused on closing the rural broadband gap.
While the initial notification of successful applicants was made in August 2018, the FCC has recently made the monies available for reimbursement to one of the County’s broadband service provider partners, Declaration Networks Group (DNG).
Last year DNG identified 2,454 Garrett County addresses to serve through this funding award and the attached map graphic highlights the census blocks containing those addresses. (Note not all addresses within the census blocks are part of the project.)
This FCC funding requires that DNG serve 40% of the identified locations by the end of the third year and an additional 20% of the locations in each subsequent year until completion in year six.
In the second announcement, Governor Hogan’s Office of Rural Broadband has recently awarded Garrett County a $60,000 grant (matched with local funds). This funding was requested to determine address-level broadband availability data to be gathered through a custom-designed web-based software solution. The County’s consultant, CTC Technology and Energy, will use this award to proceed with the data collection and feasibility study. Once collected, this information will be used to help create a plan to reach as much of the county’s unserved population as possible.
“The service availability map for the County can end up looking a bit like Swiss cheese with unserviceable areas; but, we are ever-increasing our efforts to reach as many potential customers as we can. The Board of County Commissioners continues to commit resources to the ongoing development of broadband infrastructure through innovative collaboration with Internet Service Providers,” said Kevin Null, Garrett County Administrator.
Currently, the infrastructure in Garrett County has been developed to deliver broadband internet access to approximately 75-80% of County occupied-addresses. The aforementioned feasibility study will further refine this estimate. 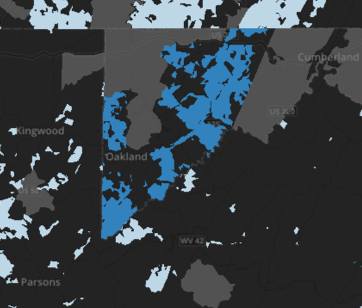 NOTE: Areas in dark blue are the census blocks in Garrett County that have been identified for support through the FCC award and include the 2,454 addresses. Note: Not all addresses within the blue areas are part of the project; the gray and dark areas are not included in this FCC project.