Last Updated on Mar 4, 2020 at 2:19pm | Communications Office
The Garrett County Complete Count Committee has been working for the last few months to ensure Garrett County is ready for the upcoming Census 2020. The committee is reinforcing the importance of a complete and accurate Census count and their tagline is “Garrett County Counts Because You Do!”
The 2020 Census counts every person living in the 50 states, District of Columbia, and five U.S. territories and is mandated by the Constitution. Each home will receive an invitation to respond to a short questionnaire—online, by phone, or by mail. This count will mark the first time that residents will be able to respond to the census online.
Participating in the census is required by law, even if you recently completed another survey from the Census Bureau. A complete and accurate count is critical for our communities because the results will affect community funding, local libraries, congressional representation, and more.
Every year, billions of dollars in federal funding go to services like hospitals, fire departments, schools, roads, and other resources based on census data. The results of the census also determine the number of seats each state will have in the U.S. House of Representatives and the results are used to draw congressional and state legislative districts.
Residents will receive an invitation to respond to the Census beginning in mid-March. And, by mid-April, the U.S. Census Bureau will mail a paper questionnaire to every household that hasn’t already responded.
Locally, 15 separate sites are planned throughout the county, representing the seven county census tracts, for collecting Census 2020 information. The sites will offer a laptop to enable people to complete their Census entry and those who participate that day can enter to win a gift card incentive.
The details of the local collection sites are included below: 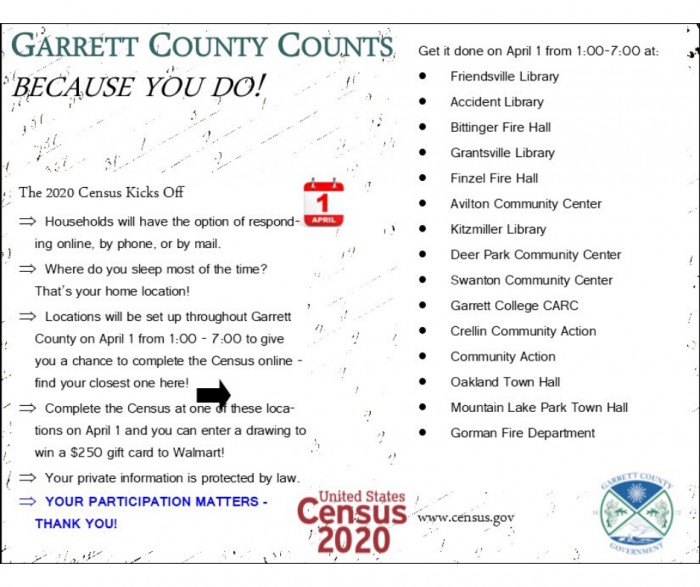 The State of Maryland has awarded the Garrett County Complete Count Committee grants to fund the giveaways/incentives for the promotion of the Census 2020 response.
The Committee is making sure that however you choose to respond—online, by phone, or by mail—that the census is accessible.
For more information, please visit www.2020census.gov.