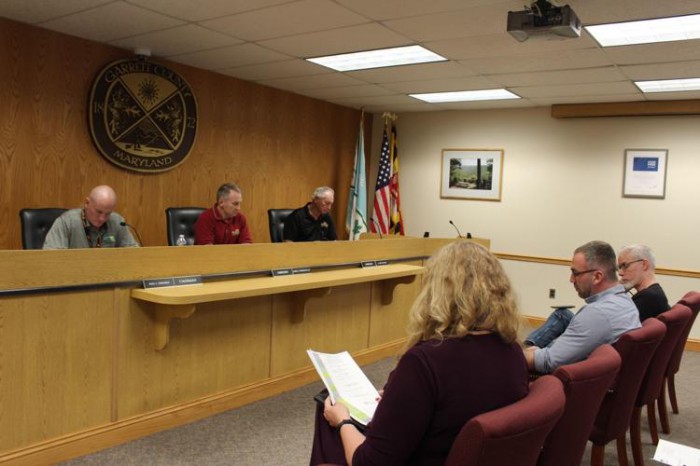 The Garrett County Commissioners awarded a bid for a brick planter replacement project at the Garrett County Community Action building during their public meeting Monday afternoon.
Purchasing agent Brian Bowers said the current planter, which has leakage and other issues, is located near one of the building’s entrances.
“Bids were accepted at 1:30 p.m. April 26,” he said. “We received a total of three bids. The recommendation is to award the bid to Lapp Concrete Company LLC.”
The Accident company’s bid for the planter was $23,750, plus $3,500 for a new footer. Bowers indicated the footer is needed because of ongoing weather-related issues creating problems at the building site.
“The Facilities and Maintenance Department’s fiscal year 2018 budget includes an appropriation of $20,000 to cover this project,” Bowers said. “A budget amendment is currently underway to fund the additional project cost.”
The commissioners agreed with Bowers’ recommendation and accepted Lapp Concrete’s bid. The company has 45 calendar days to complete the project.
BYCO Enterprises Inc. bid $28,000 for the planter and $6,500 for the footer. Mill Creek & Company LLC bid $32,625 for the planter, plus $3,500 for the footer.
Also during their public meeting Monday, the commissioners issued a proclamation declaring May 2018 as Better Hearing and Speech Month in Garrett County.
The document commends the efforts of audiologists and speech language pathologists in Garrett County for their efforts to eliminate or minimize the “isolating effects” of communication disorders. Their work helps to “empower” individuals with communication disorders to “live independent, productive and fulfilling lives.”
The proclamation also notes that one in 10 families is affected by hearing and speech problems.
“We encourage all citizens to recognize the achievements of audiologists and speech pathologists in improving the quality of life for people with communication disorders,” Commissioner Paul Edwards read from the document.
The Commissioners’ next public meeting will be held at Crellin Elementary School beginning at 7 p.m. Tuesday.
Requests to be on the agenda should be made to Carol Riley-Alexander, executive assistant to the Commissioners and county administrator. She can be contacted at 301-334-8970.