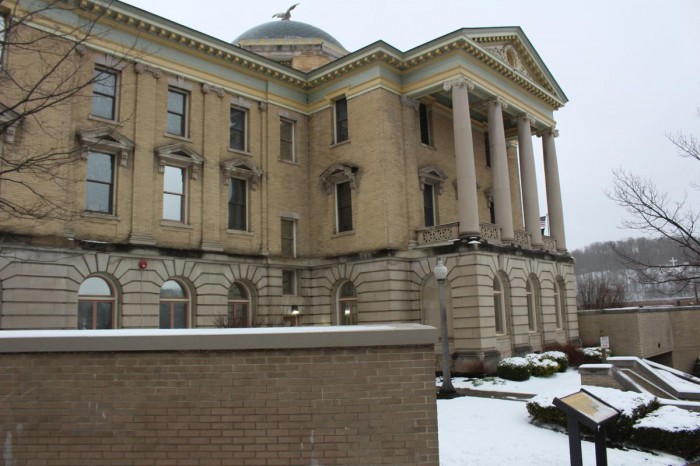 The Garrett County commissioners awarded a bid Tuesday afternoon to a Pennsylvania company that will conduct a historic structure report on the Frederick A. Thayer III Courthouse in Oakland.
“The purpose of this report is to document the existing history of it, the current conditions of it, including mechanical, and for recommendations on improvements that can be made to preserve it and keep the historic nature of it,” Brian Bowers, county purchasing agent, said. “It would also assist us in some form, hopefully, in securing grant funding.”
Bowers’ office accepted proposals on Feb. 27. Six responses were received, according to Bowers.
A selection committee then reviewed the proposals, based on evaluation criteria contained in the county’s request for proposals, and an overall evaluation summary was developed indicating the ranking of the proposals.
“We also checked references,” Bowers said.
Based on the evaluation summary, cost proposals, and references checks, the selection committee recommended the contract be awarded to Stiffler, McGraw Architects of Hollidaysburg, Pa. The company’s bid was $27,500.
“There is an appropriation in the current fiscal year budget in the amount of $30,000 under facilities and maintenance to cover this project,” Bowers noted. “Stiffler, McGraw anticipates completion of this report by October.”
The commissioners concurred with the selection committee’s recommendation and awarded the bid to Stiffler, McGraw.
The other bids are as follows: Slats & Vellum Historic Preservation LLC, Morgantown, W.Va., $5,222; WYK Associates Inc., Clarksburg, W.Va., $25,390; Building Conservation Associates Inc., New York, N.Y., $28,713; Easton Architects LLP, New York, N.Y., $29,700; and MTFA Design & Preservation, Washington, D.C., $30,000.
Designed by architect James Riely Gordon (1863–1937), the original portion of the courthouse was constructed in 1908. The structure is listed on the National Register of Historic Places.
The Maryland Historical Trust describes the three-story courthouse as a “neo-classical Renaissance Revival masonry structure in the form of a Latin cross with a central rotunda.” The upper-level rooms are arranged in galleries around the rotunda.
The courthouse’s exterior dome features an “octagonal base decorated with anthemions and surmounted by an eagle with wings spread.”