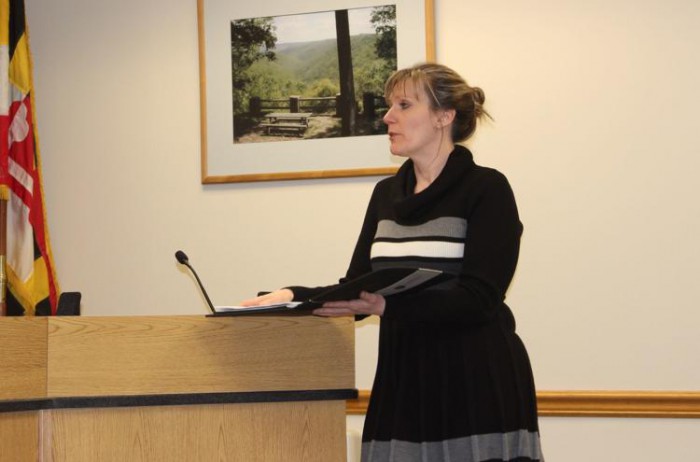 The Garrett County commissioners unanimously approved the county’s 2019 list of state transportation priorities during their public meeting Tuesday afternoon at the courthouse.
The document, along with a formal letter and details about the requested capital projects, will be forwarded to the Maryland Department of Transportation for its consideration.
Garrett County Department of Planning and Land Management Director Deborah Carpenter presented the list to the commissioners.
“We do this presentation of the transportation recommendations every year,” Carpenter said. “You know our process. I solicit input from Garrett Trails, from all municipalities, from the Planning Commission, from our roads department. You have the list before you. It looks very similar to last year’s.”
She noted the county government priorities are the same, except for an addition to last year’s Md. 135 and Turkey Neck Road intersection safety priority.
“We had a recommendation to consider an acceleration lane, a merging lane if you will, to help alleviate some of the safety concerns there,” Carpenter said. “We actually had a citizen who submitted some information to the Planning Commission to consider.”
The citizen also suggested the state place warning signs and/or reduce the speed limit near the intersection as added safety measures, the director noted.
“Bear in mind, these are State Highway Administration roads, so what they consider to do or not do is up to them,” Carpenter said. “But we can make suggestions.”
Another addition to this year’s list is a safety issue raised by Grantsville regarding the U.S. 219 North re-alignment project. Ground was broken for the initiative in October.
“Their concern is that trucks are going to speed and that, perhaps, SHA might want to consider some speed limit reductions, especially in the more-crowded areas,” Carpenter said.
Once again, listed under major (above $5 million) transportation projects in the development/evaluation phase category are the Oakland Alternative Truck Route (requested by the town), Loch Lynn Bridge Project (requested by the town) and Friendsville Pedestrian and Bike Bridge (requested by Garrett Trails.)
Listed under minor (below $5 million) transportation planning priorities are the Md. 135 and Md. 495 truck corridor feasibility study and “functional improvements” at the Md. 495 and Durst Road intersection.
The list also includes seven safety, two system preservation, two sidewalk/streetscape, trail and pedestrian, transit and regional transportation priorities.
Following Carpenter’s presentation, the commissioners adopted her department’s transportation priority recommendations.
In other county business:
• The commissioners rejected five bids, ranging from $4.75 million to $5.61 million, to construct the Garrett County Emergency Operations Center. After the center has been redesigned to bring the cost down to meet the county’s available level of funding, the project will be rebid.
• The commissioners unanimously approved the $100,000 purchase of 31.86 acres along Hoyes Run Road. The site will include wells and a water treatment plant for the Hoyes Run Water System.
• The commissioners adopted a resolution which updates the Garrett County Ethics Ordinance. The change was necessary to reflect a new state requirement.
County attorney Gorman Getty explained that during the 2017 General Assembly session, legislators made a change to the ethics ordinance as it applies to local governments.
“It prohibits statewide office holders from lobbying county government within one year of the end of their term in the legislature,” he said.
The commissioners’ next meeting is 4:00 p.m. March 4th at the courthouse.