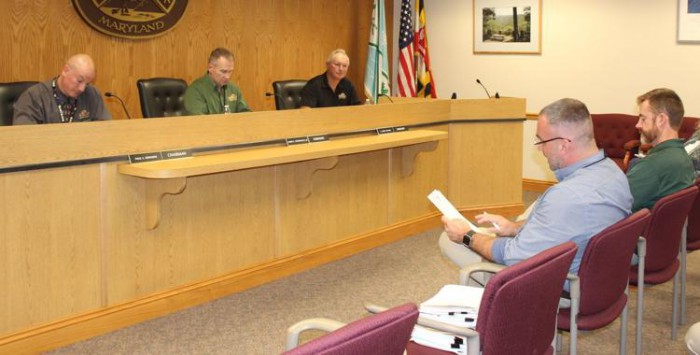 The Garrett County Commissioners awarded a $1.56 million contract for a Public Utilities Division project Tuesday afternoon.
They also rejected proposals for animal adoption services.
Purchasing agent Brian Bowers said bids for the Friendsville wastewater treatment plant equalization tank replacement initiative were advertised for two weeks and were due Aug. 23.
“Three bids were received for this project,” he reported during the public meeting at the courthouse.
Byco Enterprises of Grantsville was the lowest bidder at $1,156,444; followed by Carl Belt Inc. of Cumberland at $1,199,600; and Snyder Environmental Services of Kearneysille, W.Va., with $1,311,693.75.
“After reviewing the bids for compliance and based on feedback from the Department of Public Works’ Utilities Division and concurrence from USDA, the recommendation is to award the bid to Byco Enterprises,” Bowers said, noting he had just received U.S. Department of Agriculture approval.
The commissioners agreed with the recommendation and awarded the contract to Byco.
After receiving its notice to proceed, the company will have 210 calendar days to complete the work.
“This project is funded through USDA Rural Development and Community Development Block Grant funds,” Bowers said. “These are administered by the Maryland Department of Housing and Community Development.”
The tank replacement work includes demolishing and disposing of the existing 300,000-gallon steel tank, constructing a new 500,000-gallon precast concrete tank and its foundation, providing the tank mixing system and necessary pipes and appurtenances and paving the existing entrance road.
Bowers also reviewed a request for proposals issue regarding the Garrett County Animal Shelter and pet adoption service.
“The county accepted proposals on Aug. 21 for this,” Bowers said. “A total of three responses were received.”
An evaluation committee, which included County Administrator Kevin Null, then reviewed the proposals.
“Upon further discussion, it has been determined that the recommendation for this is to reject all proposals,” Bowers said. “Outsourcing of this service is not in the best interest of the county at this time.”
The commissioners agreed with the recommendation and rejected the bids.
The reason a request for proposals was issued, Commissioner Paul Edwards explained, was to see if the shelter could be operated privately, more efficiently.
According to Null, the bids were from HART for Animals, $241,617; the Garrett County Humane Society, $174,799; and Paws, Claws and More, $143,200.
“So based on the analysis of the cost,” he said, “we feel we can continue to run the animal shelter as it is — more efficiently and cost effectively — than these proposals.”
In other county business, the commissioners:
• Proclaimed October “I Can Swim” Month in Garrett County.
• Proclaimed Oct. 21-27 as Economic Development Week.
• Signed a resolution to adopt a “redefined” mission and vision statement for
Garrett County government.
The document states, “The mission of Garrett County government is to provide our citizens timely, efficient services in a responsible manner.”
The vision statement notes, “Garrett County government will provide effective stewardship over county assets and will deliver high-value services to citizens in an efficient, responsible, customer-focused way as it helps make Garrett County a great place to live, work and play.”
The commissioners’ next public meeting is set for 4 p.m. Nov. 5 at the courthouse.