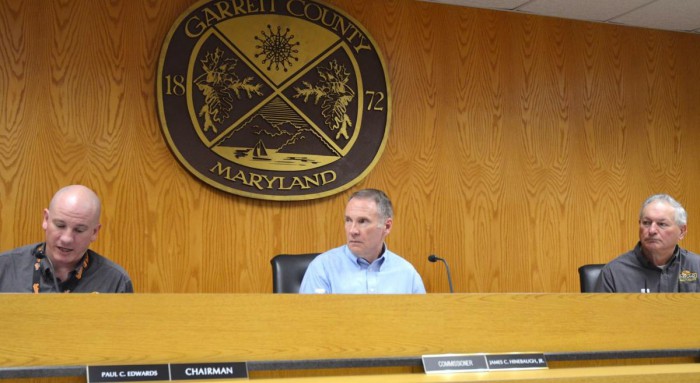 The Garrett County commissioners approved a bid Monday afternoon for the long-awaited Glendale Road Realignment Project.
Purchasing agent Brian Bowers said the county received a total of 10 bids from companies wanting to provide appraisals of 19 parcels along Glendale Road. The county plans to purchase easements to make improvements to Glendale between U.S. 219 and Zeddock Miller Road.
“After reviewing the bids for compliance with administrative requirements and based on feedback from the Engineering Department, the recommendation is to award the bid to Treffer Appraisal Group for $9,925 for completion of these appraisals,” Bowers said.
The commissioners agreed with the recommendation and voted unanimously to award the bid to Treffer. Located in Arnold, the company has 30 calendar days to complete the project.
“There is an appropriation in this current fiscal year of $10,000 to cover this within the economic development budget,” Bowers noted.
Commissioner Paul Edwards said the realignment project “has been around” for about three-and-a-half years. The appraisal service bid will now enable the initiative to move forward. He noted the appraisals are required because federal grant funding is involved.
“It’s to take out the second curve,” county engineer Dwight Emory said about the realignment work. “We already took out the first curve. There will be a little bit of widening at the entrance of Route 219 in order to improve turning lanes, and new entrances will be constructed into the north and south parcels on the front of Glendale.”
The project is needed for safety and economic development reasons, the commissioners indicated.
Treffer was the lowest bidder for the project. The second lowest was Carter & Roque Real Estate at $15,750. The highest bidder was Appraisal Services at $82,100.
The commissioners also awarded a bid for a prefabricated steel bridge, which will replace Sang Road Bridge No. 59.
Bowers said the county received a total of three bids. Based on feedback from the Engineering Department, he recommended the project be awarded to U.S. Bridge. The commissioners agreed and voted unanimously to accept the company’s $48,892 bid. The Cambridge, Ohio, company has 42 calendar days to complete the project.
Big R Bridge bid $35,256, plus $1,500 per day for on-site technical service. The company projected it would take 60 days to complete the project. Contech Engineered Solutions bid $36,358, plus $350 per day for on-site tech support. It projected an 84-day completion.
“There is an appropriation in the current fiscal year budget for $40,000,” Bowers said. “A budget amendment is underway at this time to cover that shortfall.”
The county’s bridge crew will install the structure, Emory noted.
The commissioners also conducted the following business:
• Signed a resolution setting the 2018 Garrett County tax sale date and time for 10 a.m. Friday, June 8. The sale will be held in the commissioners’ meeting room at the courthouse.
• Recognized local robotics teams NeXT GEN, iLego, and GaCO 1629 for their recent competition achievements.
• Proclaimed April 2-8 National Public Health Week in Garrett County.
• Signed a road name resolution officially designating Charles Lane. Located in Deer Park, the roadway was formerly known as Hooker Street.
• Heard a Maryland fiscal year 2019 transportation grant application presentation from Garrett County Community Action Committee officials. The state and federal funding will be used by Garrett Transit for operational assistance and capital expenses, including purchase of two replacement vehicles.
The commissioners’ next public session will be 4 p.m. Tuesday, April 17, in the meeting room in the courthouse.