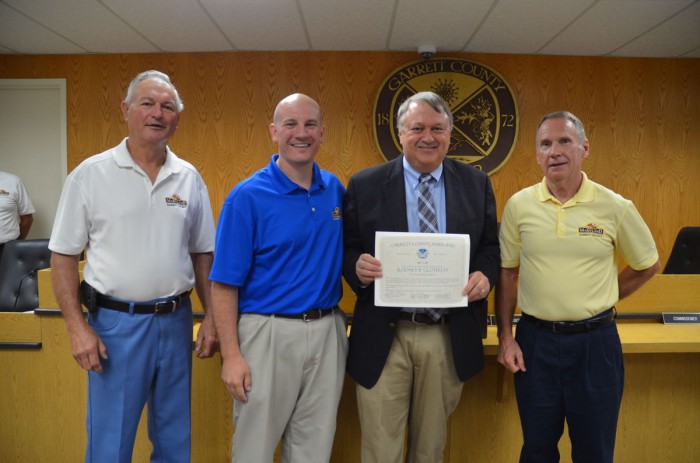 The Garrett County commissioners set aside a portion of their public meeting Monday afternoon at the courthouse to recognize county health officer Rodney Glotfelty’s “41 years of dedicated service” to the health department and local community.

The commissioners presented the Garrett County native with a certificate of commendation and a Simon Pearce glass clock.

“Your wisdom and commitment to excellence have long inspired all of us and will be remembered for many years to come,” Commissioner Paul Edwards told Glotfelty. “We wish you good health, happiness, and continued success in your retirement.”

Glotfelty retired from the Garrett County Health Department (GCHD) last Friday, exactly 41 years after he began his career there as a sanitarian in the Environmental Health Services Unit in 1976. Prior to being appointed county health officer in Fall 1998, he was director of the Garrett County Office of Solid Waste and Recycling from June 1993 to October 1998.

“Rodney is universally respected throughout the state of Maryland, and he has done a tremendous job here,” Edwards said. “Everybody knows Rodney. Everybody respects Rodney, and everybody likes Rodney.”

Glotfelty received a Bachelor of Science degree in zoology/animal biology from the University of Maryland, College Park, in 1974. In 1980, he was awarded a master’s degree in public health environmental health/epidemiology from the Johns Hopkins Bloomberg School of Public Health.

Commissioner Jim Hinebaugh noted that before Glotfelty’s appointment as county health officer, the GCHD was “grappling” with many issues.

“There were a lot of locations,” Hinebaugh said about the lack of a central office. “There were a lot of personnel issues. He was able to pull that all together. I’ve been in a number of meetings where I’ve heard state-level officials refer to the Garrett County Health Department as a model for the rest of the state.”

The commissioner attributed much of the turn-around to Glotfelty’s leadership.

“He’s made Garrett County a much better place to live for a lot of people,” Hinebaugh said. “He and his organization have been able to provide a lot of support and help to people who otherwise would have had nowhere else to go.”

“It’s been a great honor and privilege to know you and work with you,” Tichnell told Glotfelty. “You’re a great gentleman, great friend, and I appreciate all that you’ve done for us and this county.”

One of those achievements is GCHD receiving national approval from the Public Health Accreditation Board. Edwards likened it to winning the Super Bowl. Another highlight is the department’s new website, which was designed to create a “strong digital presence” in the community, according to Diane Lee, GCHD public informational officer.

“It’s been a wonderful career in public health,” Glotfelty said after the commissioners’ meeting. “I’m lucky to have served the citizens of Garrett County for such a long time. It’s such a great place to work because of the incredible wealth of community partners. The entire health care community works together to improve the health of our citizens.”

The commissioners have appointed Bob Stephens as the new Garrett County health officer. He served as director of GCHD’s Behavior Health Unit for numerous years. Les McDaniel has been named Stephens’ replacement.

The commissioners’ next public meeting is scheduled for Monday, July 17, at Friendsville Town Hall at 5 p.m.