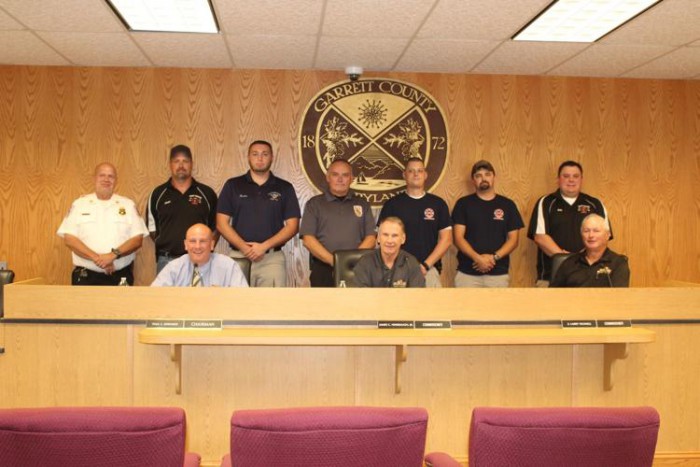 The County Commissioners recognized the recently formed Garrett County Swiftwater Rescue Team during their public meeting Tuesday afternoon (August 20th) at the courthouse in Oakland.
“I’m very pleased,” said Emergency Management Director John Frank about getting a team started. “It’s been a long time coming for Garrett County.”
He noted the team is organized under Garrett County Emergency Services, known as Company 8.
“Emergency Management just kind of helps facilitate, administer and approve deployments,” Frank said. “It’s our volunteers who have this kind of commitment.”
The Deep Creek Volunteer Fire Company serves as the team’s coordinator. Six other volunteer departments participate in the effort — Deer Park Community, Oakland, Kitzmiller, Eastern Garrett, Bloomington and Friendsville. Deep Creek Fire Chief Jason King is team leader.
“We’ve all agreed to use our equipment however it’s needed — in the county or out of the county,” King said. “And we’ve all agreed to use our resources, whether it be Bloomington with their roads and swiftwater equipment, Friendsville with theirs, Deep Creek or Oakland.”
About 50 local volunteers are certified swiftwater technicians.
“We have our operating guidelines,” Frank said about being on the team. “We have our policies, procedures and an application that goes through an approval process.”
King said organizing the team was “pretty painless.” He indicated there were very few disagreements over the bylaws and procedures.
Membership requirements include being a member in “good standing” with a Garrett County fire/emergency medical services department, passing certain swim qualifications and participating in annual training/recertification.
“It’s very serious business,” Frank said about becoming certified. “It’s a difficult accreditation process that you have to go through because you are going to be in harm’s way.”
In addition, special equipment and boats have to be purchased and maintained.
“The fire companies have actually spent a good bit of money on this equipment to get this service for Garrett County,” King said. “I know that Deep Creek has probably spent $40,000 this year of our resources for the team.”
He said all the departments should be recognized for their contributions and efforts.
Frank indicated that organizing a team through the various departments was made possible by the commissioners’ support for workers’ compensation insurance, which is facilitated through the Garrett County Volunteer Fire and Rescue Association.
“That’s what helps to protect our volunteers, because some companies didn’t have that safety net,” Frank said.
Commissioner Jim Hinebaugh asked about the team’s response area.
“Would they be deployed to West Virginia or Pennsylvania?” he asked.
“Yes,” Frank said, noting members recently assisted with a flooding incident in Bayard, W.Va.
Commissioner Paul Edwards asked about the number of times members have been deployed. King said the team has been alerted four or five times in recent months.
“We’ve also used them for search and rescue,” Frank noted. “Recently, we had a search at Deep Creek Lake State Park that we alerted for boats to search the shoreline.”
He reported the team has been “very successful.”
The Commissioners’ next public session is scheduled 4:00 p.m., September 17th in their meeting room at the courthouse.