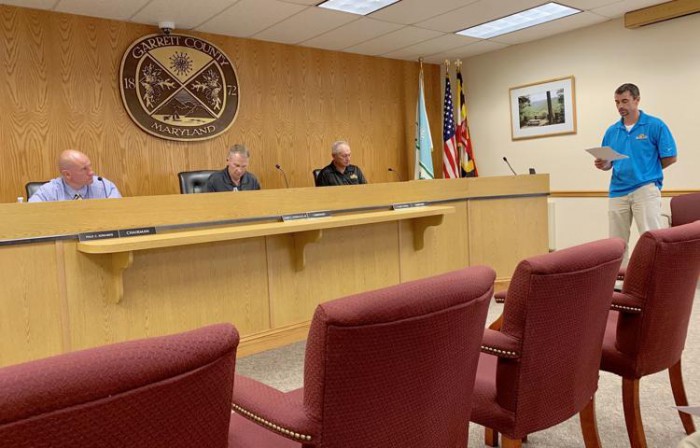 The Garrett County Commissioners recently signed resolutions to obtain United States Department of Agriculture loans totaling $638,000 for two projects — the Bloomington water treatment plant and Friendsville wastewater equalization tank.
Garrett County Department of Financial Services Assistant Director Jeff Broadwater provided a brief overview of the initiatives during the commissioners’ public meeting last week.
“The Bloomington water treatment plant is about a $1.7 million project,” he said.
Broadwater noted about 80 percent of cost has already been obtained through USDA Rural Development and Community Development Block Grant funding.
“This gets us to the point where, with some financing and various financing packages, we’re able to do this project without any increase to the ad valorem rate,” Broadwater said. “We’re happy about that.”
The new Friendsville wastewater equalization tank is about a $1.3 million project, according to the assistant director.
Broadwater indicated that by paying off existing debt, refinancing with USDA and obtaining assistance from CDBG, this project will also be accomplished without increasing customers’ ad valorem rate.
He said obtaining a USDA loan is a three-step process.
“We have to approve a resolution for USDA,” Broadwater said. “We have to approve a resolution acting as the Garrett County Sanitary District, and then the Board of Garrett County Commissioners has to sign a resolution supporting those two resolutions.”
The commissioners signed USDA documents to obtain a $376,000 loan for the Bloomington project and a $263,000 loan for the Friendsville tank.
“I just want to commend you for taking our request at heart to try to not raise ad valorem taxes in any way shape or form,” Commission Chairman Paul Edwards told Broadwater. “I know there were some things you had to do and there was some creativity in there, so thank you very much for that. And I’m sure the residents of Bloomington and Friendsville will share that sentiment.”
The commissioners’ next public session is scheduled for 4:00 p.m. September 17th in their meeting room at the courthouse.
Issues or concerns that are to be presented to the commissioners during any public meeting should be scheduled with Carol Riley-Alexander, executive assistant to the commissioners and county administrator. She can be contacted at 301-334-8970.