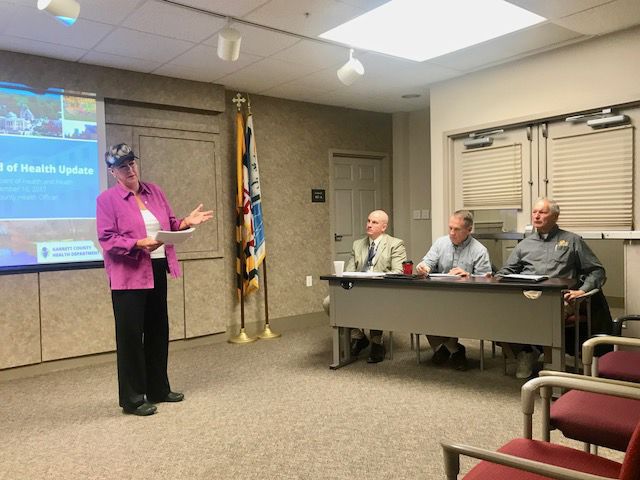 Accident area residents may soon be able to receive alerts to warn them of pending Texas Eastern “blowdowns” and other scheduled natural gas events.

The issue was discussed during the Garrett County commissioners’ semi-annual Board of Health meeting last Thursday. The session was part of the Garrett County Health Planning Council’s monthly meeting.
Linda Herdering, Bumble Bee Road, Accident, asked the commissioners and various health officials in attendance to develop an alert system for residents so they could plan for the scheduled blowdowns.
“Many of you don’t live on the Accident dome and may not be aware of what it is and what happens,” Herdering said.
Owned and managed by Enbridge Energy Partners/Texas Eastern, the “dome” refers to an underground natural gas storage field covering about 53 square miles in and around the town of Accident.
The Texas-based company’s related infrastructure includes an intricate underground pipeline system, 84 vertical wells, and a compressor station.
“Those who live near the compressor station and any of those wells are frightened because of the noise when they (Enbridge) release gases to let the pressure off the lines,” Herdering said.
She noted in a handout that a Texas Eastern permit defines these blowdowns as gas releases and purges of equipment at both the Accident compressor station and throughout the storage field.
The blowdowns are needed if a gas pipeline is taken off-line for maintenance, during emergencies, or to accommodate fluctuating demand.
Herdering said the releases, which are usually scheduled in advance, can occur on weekends and in the middle of the night.
“Blowdowns can last for two hours, and the noise is comparable to a commercial jet taking off in very close proximity,” she said. “Blowdowns and compressor engines can be extreme, enough to rattle a nearby home.”
Herdering also noted the releases can emit toxic gases, including methane, benzene, toluene, sulfuric oxide, and formaldehyde.
“This has been going on for years and years, and the residents live with it,” Herdering said about the blowdowns. “They know what it is. But it would be really nice if they had advance notice that this happens, like many other towns do. These are scheduled events. Enbridge Energy knows when they are going to do this. If it’s an emergency, that’s another story.”
In other areas, such as Myersville, where natural gas releases occur, town officials and/or energy companies alert residents via emails. Herdering indicated the warnings enable people to schedule their plans accordingly to avoid the noise and toxic exposure.
“There are a hundred reasons,” she said about the need for an alert.
She pointed out it would be easy for the county to set up an email warning system, as it already has a website that alerts residents about certain issues.
“I’ve asked Enbridge Energy to do it, but they’re not listening to residents,” Herdering said. “We need the county’s support to work with Enbridge.”
She noted that she presented her ideas to the commissioners six months ago. Commissioner Paul Edwards said the issue was, indeed, brought up at the last Board of Health meeting and her information was reviewed.
“We agree,” Edwards said about the need for alerts. “Over the last six months, we have had some conversations with Enbridge. They do not do that (send out alerts). They have no interest in doing that. They have their own policies and procedures that, at this point in time, they are not going to change.”
Edwards stressed that the county and state do not have any legal authority to make the company change its policies.
“However, we are working on exactly what you asked for,” he told Herdering. “If Enbridge won’t do it, we’re trying to create a mechanism to do it. We have some of the infrastructure in place through our IT Department, but we have to do some upgrades to our website.”
Edwards noted that should be completed within the next 30 days.
“They (IT personnel) are working on it right now,” he said.
Edwards indicated residents will be able to sign up on the county’s website on the Citizen Connect page to receive alerts about a scheduled blowdown.
“But here’s the caveat to that,” he stressed. “We’ve asked Enbridge to let us know when they are going to do it so we can, therefore, put the information out. If they don’t do that, there’s not much we can do.”
Edwards said he was led to believe that Enbridge has basically agreed to inform the county.
“So, that is the hope,” he said.
Edwards told Herdering the commissioners and Board of Health agreed with what she said.
“We’re trying to fix that,” he said. “People should be notified, and we’re trying to make that possible.”
“That is wonderful news,” Herdering said. “Thank you very much.”
Persons interested in obtaining more information can email her at herdering@earthlink.net.