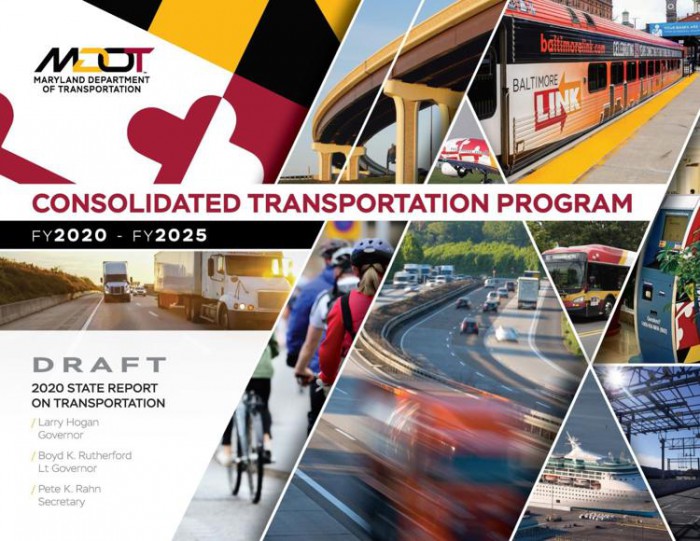 The Maryland Department of Transportation has begun its annual tour of 23 counties and Baltimore City to update local officials and the public on the state’s six-year capital plan.
At each stop, transportation officials will review a draft of their fiscal year 2020-25 Consolidated Transportation Program and seek input on local concerns and projects.
They will meet with the Garrett County Commissioners on Friday, October 4th, at 10:00 a.m. at the courthouse, 203 Fourth Street, Oakland, in Room 209. Members of the general public are also invited to express their concerns during the session.
Garrett County Department of Planning and Land Management Director Deborah Carpenter will present the county’s list of priority capital projects: major and minor transportation, safety, system preservation, sidewalks/streetscapes, trails and pedestrian walkways, local transit and regional transportation. This year’s list is nearly identical to last year’s document.
Once again, listed under major (over $5 million) transportation projects in the Evaluation Phase category are:
1.  Oakland Alternative Truck Route (requested by the town),
2.  Loch Lynn Bridge Project (requested by the town) and
3.  Friendsville Pedestrian and Bike Bridge (requested by Garrett Trails).
The U.S. 219 North Reconstruction/Relocation is the only project listed under Construction Phase.
“Garrett County ranks the U.S. 219 North/Chestnut Ridge Road Project as our highest regional priority and requests (a) the completion of the planned breakout project and (b) the acquisition of right-of-way from the breakout project to the Pennsylvania line,” the county’s list states.
Listed under minor transportation projects (less than $5 million) are two planning priorities: the proposed Truck Corridor Feasibility Study (MD 135 and MD 495) and functional improvements to the intersection of MD 495 and Durst Road.
“The county is asking that a feasibility study be done to determine the amount of truck traffic currently passing through downtown Oakland, MD 135, MD 495 and/or a new Oakland alternative truck route,” the list notes.
The county’s safety priorities are installment of a crosswalk on U.S. 40 to Penn Alps to the Casselman River (requested by Grantsville), speed reduction on U.S. 219 North to the Pennsylvania line and improvements at the MD 495 and Glendale Road intersection, the U.S. 219 and Kings Run and Builders Way intersections, MD135 and Sand Flat Road intersection and MD 135 and Turkey Neck Road intersection.
The county is also requesting the State Highway Administration conduct a roadway safety audit of MD 42 from Bishoff Road to Maple Street in Friendsville.
“This roadway is narrow, windy and very steep in some locations, especially Elder Hill,” the county notes. “SHA has installed an additional lane, signage and some lighting on Elder Hill to alleviate some problems, but concerns about the safety of intersections along this road remain. Accidents have occurred at various places along this road. Concerns include site distance, steepness and lack of berms on the road.”
The county’s system preservation priorities involve stormwater drain repairs on U.S. 219 at Burger King (requested by Oakland) and at Oakland Drive (requested by Mountain Lake Park).
Two sidewalk priorities are also listed: an Oakland streetscape project (requested by the town) and Grantsville’s request to install a sidewalk along U.S. 40 between the access road for the Casselman River Bridge State Park and River Road.
Trail and pedestrian priorities include construction of a pedestrian crossing at U.S. 219 and Mosser Road (requested by Garrett Trails), evaluation of the existing pedestrian crossings at Uno’s and Trader’s Landing for safety improvements and grant funding for the Meadow Mountain Trail (requested by Garrett Trails).
The county’s No. 1 transportation priority is transit service expansion.
“The county asks that the Maryland Transit Administration increase funding for the Garrett Transit Service fleet of vehicles in order for the system to support full-time utilization,” the list notes.
The No. 2 priority is a passenger train feasibility study.
“The county supports the town of Oakland in its quest for a return of passenger rail service to the Oakland Train Station,” the list states. “Due to the number of visitors, second-home buyers and retirees from Washington, D.C., Baltimore and Pittsburgh, a renewal of passenger service would not only increase the economic viability of Oakland and Garrett County, but also decrease traffic congestion.”
County officials have one regional transportation priority.
“To further our common goals, Garrett County wishes to form a regional transportation committee with full backing, support and participation of SHA,” the county notes in its list. “Membership would include not only SHA but also the West Virginia Department of Transportation, Monongalia County, W.Va., Garrett County, and Allegany County, as well as other neighboring counties in Pennsylvania and West Virginia.”
MDOT’s six-year draft budget allocates $15.3 billion for capital priorities throughout its transportation network, including the Maryland Aviation Administration and Motor Vehicle Administration.
After their statewide tour, MDOT officials will prepare their final CTP budget to present to the General Assembly in January.
The draft document is available for viewing online at mdot.maryland.gov/newMDOT/Planning/CTP/Index.html.