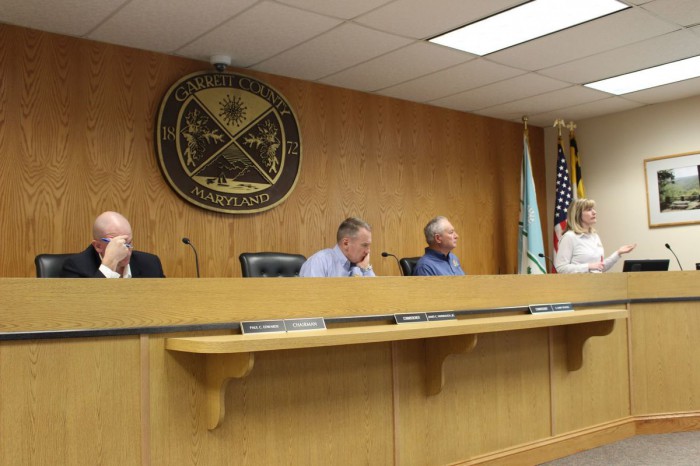 Deborah Carpenter, director of the Garrett County Department of Planning and Land Management, reviewed the 2018 priority list of projects that county officials plan to send to the Maryland Department of Transportation. The Oakland bypass is on that list.

Carpenter went over the items during the Garrett County commissioners’ meeting Tuesday afternoon at the courthouse. About 35 people attended, the session.

The director explained that all Maryland counties submit lists each year for possible inclusion in MDOT’s Consolidated Transportation Plan.

“That does not mean that it will be included,” she said about Garrett County’s list. “All we can do is say what are our priorities, and they decide whether or not it is included. Because of this, many that are on the list will remain there for years, sometimes.”

For example, Carpenter said, nothing on this year’s list was completed in 2017. She reviewed how the county determines what goes on its list.

“Every year, we (Planning and Land Development) request what the transportation priorities are from the municipalities,” she said. “We ask Garrett Trails for trail and pedestrian priorities that they have. We ask the Garrett County Planning Commission, and we ask the county roads department.”

After Carpenter’s department compiles the information, she presents the priorities to the commissioners for their review. They can revise it before sending a finalized list to MDOT.

“Because, again, nothing from last year was completed, all the agencies we solicited this year said their priorities were the same,” the director said.

Topping the list under “Major Transportation Projects (over $5 million), Development and Evaluation Phase, is the Oakland bypass, also known as the Oakland Alternative Truck Route. Oakland officials, who requested this as a priority, are also calling it the Ninth Street Extended (truck route.)

The most recent design shows a 2.4-mile, 50-mph zoned highway diverting off U.S. 219 just north of Walmart, going behind Walmart and Garrett Regional Medical Center, and ending at the current U.S. 219 and Md. 135 intersection near Burger King. A roundabout is also shown on Dennett Road.

Ten people at the commissioners’ meeting voiced opposition to the project. Two supported the initiative.

“I do not feel that the bypass is going to be devastating to the Oakland business community,” said David Moe. “Where do you think people are going to go if there’s a bypass? Red House? I don’t think so.”

Moe pointed out that Oakland has banks, insurance companies, antique stores and food services. Consumers will still come into Oakland, even with a bypass, he indicated. Those who want to go to Deer Park, Mountain Lake Park, Red House or other areas can take the alternate route.

“I feel that helps Oakland,” Moe said, indicating the bypass would ease traffic and help with parking issues.

Eight other people disagreed, including Lois Swartzentruber, the daughter of a former Oakland mayor.

Gloria Salazar, who works at a downtown business, said merchants experienced revenue losses between 12 and 15 percent last summer because of road work related to a water project. She said the bypass would take two to three years to construct.

“What do you propose to do for local merchants who can expect at least a 12 to 15 percent decrease in revenue over that period of time?” Salazar asked the commissioners.

Mike Bell said the commissioners had to make a decision on whether to delete the project or keep it as a priority. But, he added, he was “a little confused.”

“If only 1 percent of traffic is trucks, and if the accident rate is less than average for the state,” he told commissioners, referring to statistics presented by Engage Mountain Maryland member Eric Robison, “and if there’s no growth in traffic, and we know that these kinds of large construction projects are very disruptive to the communities where they’re taking up land and breaking up transportation routes, what’s the argument for proceeding with this project?”

Commissioner Paul Edwards stressed that the county reaches out to the towns, and the towns send in their priorities.

“This was the priority that Oakland sent in,” he said. “So the immediate answer to your question is, we have to take that into very serious consideration.”

He indicated part of that consideration involves talking with Oakland officials, who were elected by town residents. Edwards added the commissioners were not involved in city officials discussions about the bypass and why they feel it is a priority.

Edwards noted SHA has cited safety as a reason for the bypass.

Dr. Dona Alvarez, an orthopedic surgeon, cited safety as a reason not to have the bypass.

“Much of my work has been centered around helping people who have had unfortunate events, many because safety regulations were not followed,” she said. “This includes farm injuries, work injuries, motor vehicle collisions.”

Alvarez said she has conducted much safety research regarding the bypass issue and has presented those findings at numerous meetings over the years. The bypass highway would go through residential areas that are currently zoned at 30 mph.

“My past and continuing research about this road,” she said, “which is .5 mile from two nursing homes and three schools and cuts through residential Oakland, has confirmed that we need to stop and ask, ‘Who is this for?’”

Alvarez suggested that SHA use the $1 million it will get for designing the project on such issues as speed limit enforcement, aggressive driving pervention and driver education.

“We should spend money on safety improvements — not increasing the speed of our current traffic,” Alvarez said.